I love minimalism, I believe the lifestyle philosophy is hugely beneficial for both mental clarity and lifestyle simplification.  Its a reoccurring theme in my blogs.  Last year I wrote about minimalism in a two part series Minimalism & Living Simply; Part 1 and Minimalism & Interiors; Part 2. The topic is also mentioned in many of my other posts including those about purging and downsizing, check out my blog archive for more.  In this blog, let me get back to basics, both in regards to minimalism in interior design and in a broader sense of life itself.

People have a preconceived notion about what a minimalist interior looks like.  Words used often have a negative connotation like barren and stark.  Case in point, the photo below: 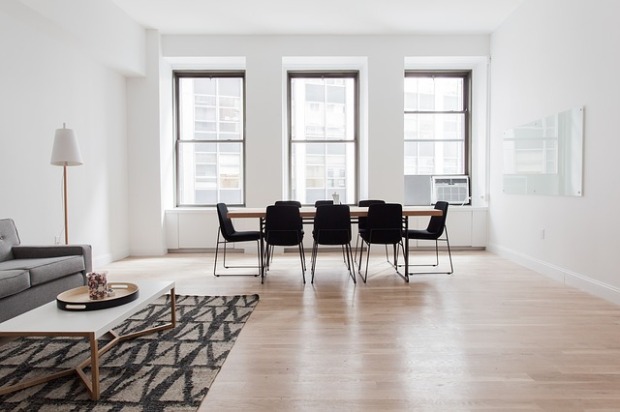 Its a simple room with only the most basic furnishings.  Most likely this photo was staged this way to make an obvious point.  In reality, minimalist style doesn’t have to be so…well, minimal.  For me, I would furnish a room with all the necessary items and then stop when something has no purpose other than being idle decor.  Simple window shades, for example in the photo above, would not detract from the minimalist aesthetic.  Its all in the way that its done.  In reality, these windows would need covering for both weather and privacy.

For a minimalist decor approach, if it serves no purpose or meaning then it should not go into your home.  Its visual clutter, fills up a space, and eventually just needs dusting.  Visual clutter and chores create stress and prevent relaxation.  Minimalism goes beyond the aesthetic but rather its about life simplification.  So that minimal interior isn’t barren and stark, rather it should really be considered simplified and calming.

The purpose of minimalism is to return to the basics and focus on what’s important in life.  Simplification for the sake of getting more enjoyment from the space and being mindful of the actual activity.  Some people would say “oh, but its not cozy!” I’m all for a cozy space, bring on the Hygge factor.  The very definition of Hygge is cozy, its a Danish philosophy focusing on the people and activity but not all of the superfluous stuff.  And you know what else does that… minimalism.

In another post I can easily write about an aesthetically pleasing cozy atmosphere that’s filled to the hilt with stuff.  But to defend my point, all of that stuff had still better serve a purpose.  To all of those people who say “I can’t get rid of my things!”, I’m not asking you to, but just ask yourself this: is your life calm? Are you relaxed or stressed? Do you have a list of chores and always find yourself searching for something or having to tidy up the house?  Maybe you’re not ready to be a minimalist yet, but would it help to start being a “reductionist”?

Join me next time for another thought provoking design topic that hopefully helps bring you insight for your home, business, and life in general.